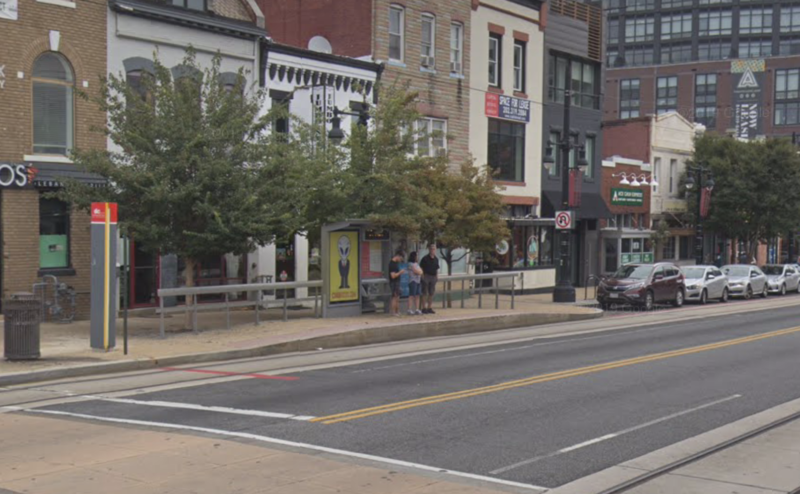 Here is a picture of the bus stop where the attempted robbery occurred on Tuesday, August 20th, 2019. From the Washington Post:

Police said the wounded man and a second suspect have been charged with assault with intent to commit robbery. They were identified as Nigel Pulliam, 26, and Keith Lamont Blue, also 26. Both are from Southeast Washington.

Police did not identify which of the men had been shot.

The incident occurred shortly before 2 p.m. when police said two men approached the victim in the 500 block of H Street NE, blocked his path and made statements indicating a possible robbery.

An arrest affidavit filed in D.C. Superior Court says one of the men was armed with a handgun with an extended magazine, and the other man held his hand under his shirt as if he had a firearm.

The victim told police he tried to walk away but was again blocked by one of the men who said, “Don’t move,” the affidavit says.

Police said the intended victim “brandished his lawfully possessed firearm and shot at the suspect, striking him in the arm.” . . .

Another article on the case is available here.

A man shot a suspect who threatened to rob him on H Street NE at about 2 p.m. Tuesday.

The man was standing at a bus stop near Fifth and H Streets NE the afternoon of August 20 when two suspects approached him.  One of those suspects said that he intended to rob the waiting man.  Believing that the suspects were armed, the man took out his legally-possessed firearm and shot at the suspect, striking him in his arm.

Police said that the shooter has a valid concealed-carry pistol license in the District of Columbia. . . .