States that allow teachers and school staff to carry guns 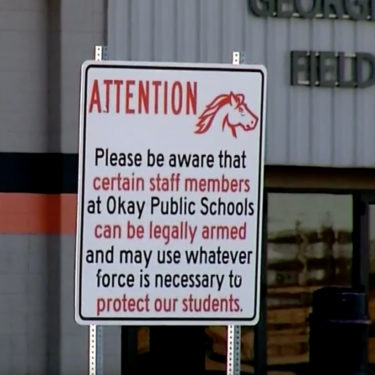 UPDATED: October 8, 2018 (ORIGINAL March 7, 2018): After the Parkland, Florida high school shooting, a number of states have considered allowing teachers and staff to carry concealed handguns.  The obvious question is how has it worked in the states that allow guns to be carried.  For example, here is information on accidental shootings and insurance premiums after they allow teachers to carry.  There are no known cases where a teacher or staff member has had their gun taken from them.
After the Parkland attack, there is evidence that strong interest by many teachers in carrying.  In one Ohio county (Butler), there were 50 requests by teachers for training within 20 minutes of the local sheriff offering training, with 300 teachers eventually signing up before the window was closed on more applicants.  It isn’t clear how many teachers in that county were already carrying.
Here is a list of the state laws with laws that allow carrying and notes on whether there are actually school districts in that state that have teachers and staff carrying. Surprisingly, few states maintain comprehensive lists on the schools that allow teachers and staff to carry (see for example, Oregon).

Sources for information available here, here, here, and here. Despite some claims to the contrary by the Giffords Law Center to Prevent Gun Violence, Alaska doesn’t allow teachers or staff with a concealed handgun permit to carry on school property. A bill was brought up before the state legislature earlier this year, but it failed to get passed.
The Giffords Law Center to Prevent Gun Violence and the Education Commission of the States both say that only eight have teachers and staff carrying guns, but they list different states in among those eight states and both have clearly missed most states.
Bills enacted into law during 2013 for Alabama, Arkansas, Kansas, Oklahoma, South Dakota, Tennessee, and Texas (the NCSL as of July 2013 had all these states but Oklahoma).  Obviously, Georgia’s law was enacted during 2014.  If you are interested in a list from a very left-wing anti-gun group, you can go to the Law Center to Prevent Gun Violence.