Fact Checker Snopes.com’s big mistakes in comparing mass public shootings in the US and Europe 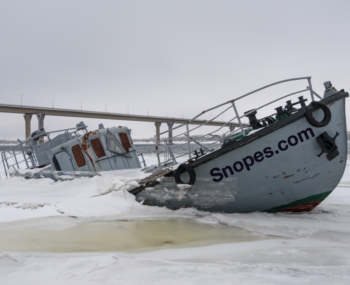 Snopes.com recently fact-checked a post that we first put up in June 2015 and updated on January 7, 2016.  This became an issue for them because a story that Fox News’ Special Report that had run a couple years ago was getting circulated on Facebook after the Florida high school shooting.  They wrote: “Our conclusion is that this is accurate based on the CPRC’s definition of a mass shooting, but also extremely misleading. It uses inappropriate statistical methods to obscure the reality that mass shootings are very rare in most countries, so that when they do happen they have an outsized statistical effect.”

They made two general points: questioning our definition of mass public shootings and that we obscure how rare these attacks are in European countries.

The first thing to note about the rankings is that Lott has compared the mass shooting death rate in the United States with that of other countries where there was a mass shooting between 2009 and 2015. This might seem obvious, but it’s important to point out that very many countries did not see a single mass shooting as defined by Lott during this period.

The second striking thing about the list of mass shootings in Europe is that it is dominated by outliers. Where the United States saw at least twelve mass shooting deaths every year between 2009 and 2015, some of the other countries on Lott’s list experienced one or two rare but very high-casualty shootings. When you average out the death rates, this creates a highly misleading impression about the consistency and lethality of mass shootings outside the United States. 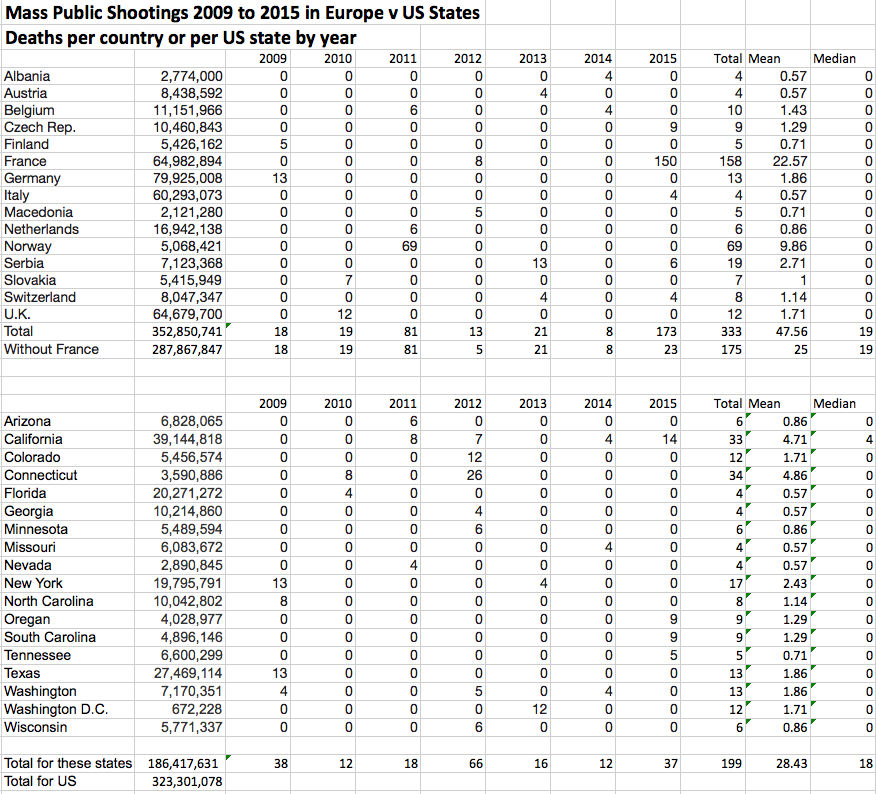 Snopes.com makes it look like our analysis only compared the US to individual countries in Europe.  They completely ignore that we also compared the US to the EU and Europe as a whole.  For four of these seven years, the total number of deaths from mass public shootings is greater in these European countries than in the US.  If one compares the yearly median for Europe to the yearly median for the US, they are virtually the same.  With or without France, the median for Europe is 19.  For the US, it is 18.

Take Snopes.com comments on our ranking of Norway:

The example of Norway gives a good illustration of just how absurd this use of statistics is. In 2009 and 2010, according to Lott’s data, there were zero mass shooting deaths in Norway. In 2011, far-right extremist Anders Behring Breivik killed eight people in a series of bombings in Oslo, then shot dead 69 more in a massacre at a Labor Party summer camp on Utoya island.

If we compare the number of mass shooting deaths each year to the population of Norway each year, using the same method we did for the United States, we get an average annual death rate of 2 per million, more than 20 times higher than the rate in the United States (0.09 per million), even though we know there were zero mass shooting deaths in six out of those seven years, in Norway.

If this strikes you as ridiculous, you’re on to something.

The following tables show the breakdown for casualties. 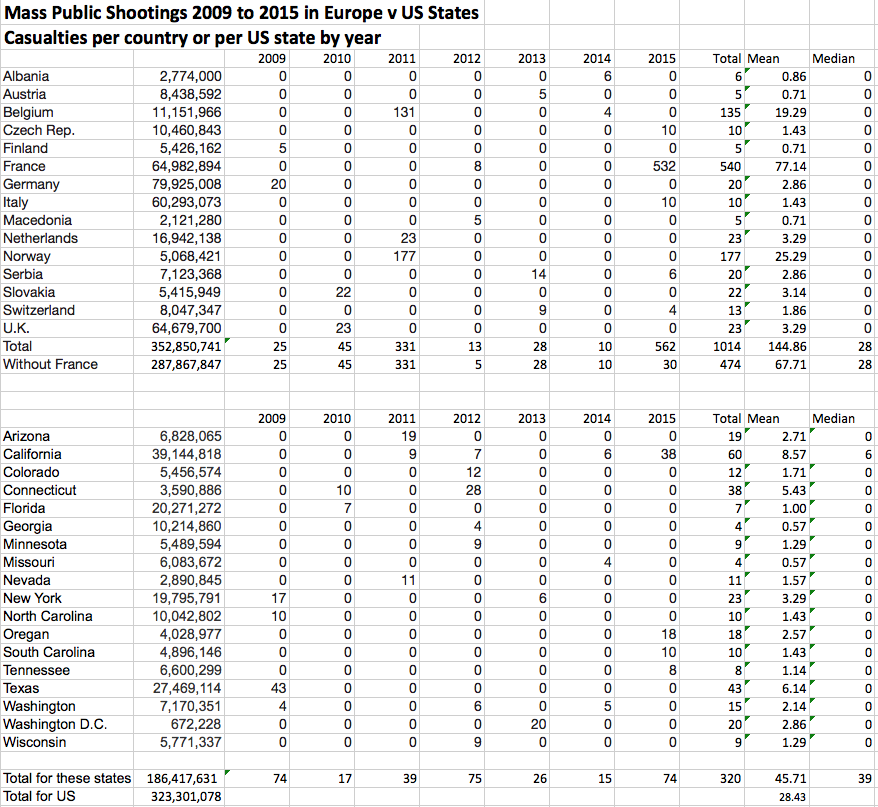 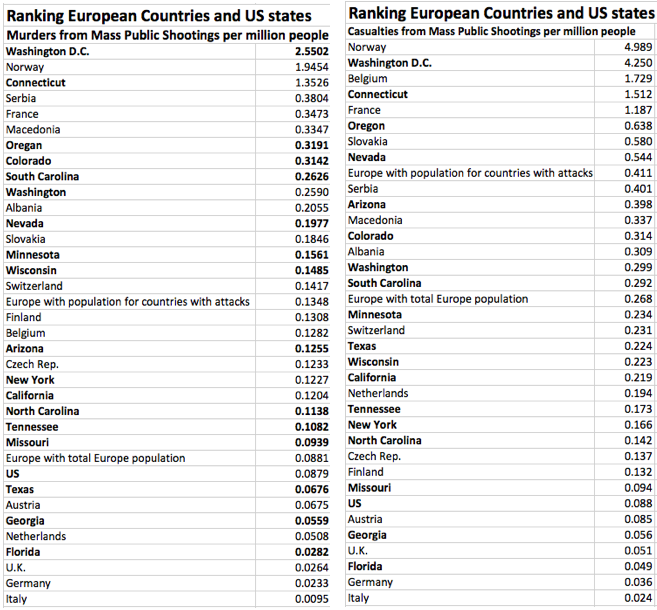 Snopes.com claims: “there are instances where the difficulty of categorizing mass shootings becomes clear.”  They give a couple of examples:

Although Zawahri killed five people, only three were killed in public in the second part of a shooting spree that was only ended when police killed him outside the college’s library. This might appear to many observers to be a mass shooting in which the attacker killed five people, but it was left out of the CPRC analysis, apparently because two of the five fatal shootings took place in a private home. Conversely, the CPRC analysis did include a 20 February 2012 incident in which Jeon Soo Paek shot dead his two sisters and their two husbands at the spa they co-owned in Norcross, Georgia.

In contrast to the public dimension of the Santa Monica shooting, all the victims in Norcross were relatives of the perpetrator, and all were killed at their family-owned place of business, reportedly after a dispute over money. However, Paek shot dead four people at a location that wasn’t a private home and — apparently on that basis — those deaths are included in the CPRC analysis.

But both of these definitions fit the traditional FBI definition.  As noted above, the FBI defined it as “four or more victims slain, in one event, in one location.”  The fact that two of the Santa Monica killings occurred in a private home also goes against the FBI definition of a “public places.”  As Snopes.com notes, the Norcross killings did involve four or more people killed at one time in a public place.

Snopes.com ignores our comparison of either the EU or Europe to the US and their second table ignores our concern about adjusting for different country populations.  If they are going to emphasize that countries in Europe with just a fraction of the US population rarely have mass public shooting (either not adjusting for population differences and/or looking at the “median” yearly rate), the only fair comparison is to look at individual states in the US.  Looking at Snopes.com’s desired measure of yearly median deaths, comparing Europe to the US or individual European countries to individual US states produces virtually identical results.  The same is true for average annual death rates, even if one adjusts for the population.  One thing completely ignored in Snopes.com’s discussion is the very high rate of casualties in Europe compared to the US.

Compare Snopes.com’s critique of our work with their pretty favorable discussion of Michael Bloomberg’s Everytown when they put out their number of school shootings.  While even a long list of left-wing fact checker have criticized these claims (see here and here), Snopes.com can’t even criticize them for not violating their own claimed rule and using shots near a school instead of at a school.