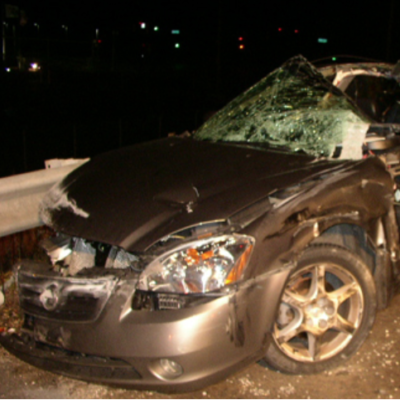 Some public health researchers have attempted to link permitted concealed carry to aggressive or reckless driving.  Before turning to two of the papers by public health researchers, let’s look at some of the data on driving behavior.  Just as handgun permit holders are incredibly law-abiding, they also drive much more responsibly than the general public. (Click on the table to enlarge.) 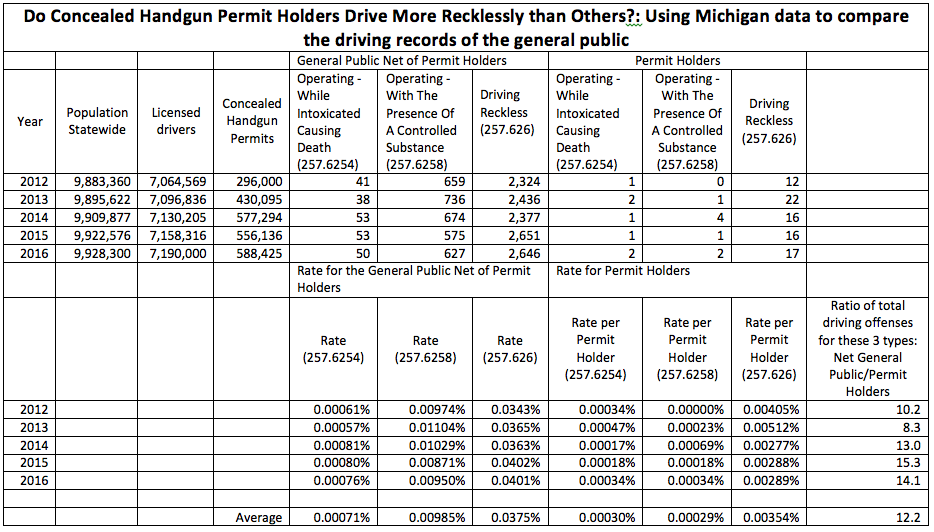 We have data for Texas in 2016 on the rate of reckless driving by permit holders, but not the rate for the rest of drivers in the state.  Still, while the comparison is only suggestive because enforcement rates can vary across states, Michigan non-permit holders are about also more likely to drive recklessly than Texas permit holders (0.0401% v 0.016%). 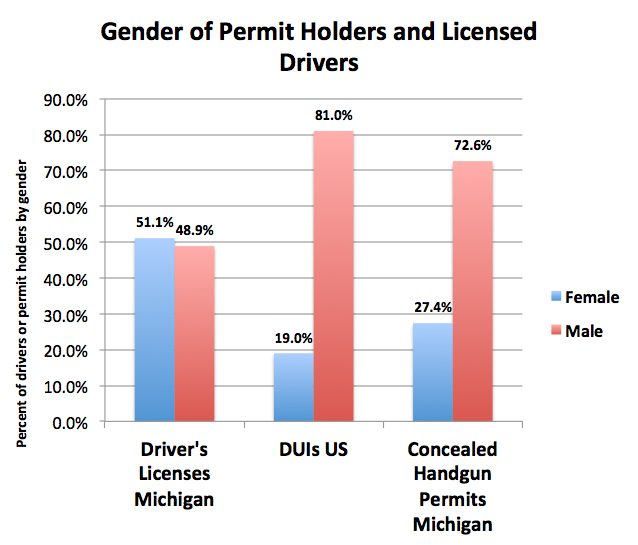 Driver’s license holders tend to be both younger and older than permit holders, and younger drivers are more likely to both be arrested for DUIs, using controlled substances, and reckless driving.  But permit holders are so much more likely to be males that young males make up a larger percentage permit holders than they do of driver’s license holders.  Nationwide, men between the age of 20 to 34 account for 32% of DUIs, but only  12.8% of drivers.  We couldn’t find the age and gender breakdown of DUIs in Michigan, but men between the age of 20 and 34 make up just slightly less than the same percentage of drivers as they do nationally (12%).  That age group of men make up an estimated 14% percentage of permit holders compared to 12% for driver’s licenses (Source: Concealed Pistol License Unit were able to pull M and F (gender) data from 2016 to Current).

As to claims that simply having a gun on the person makes them drive more recklessly, there is some recent evidence from the PEW Research Center that indicates that permit holders carry their guns with them quite frequently.

One paper by Hemenway, Vriniotis, & Miller (2006) conducted a survey that asked respondents whether they’d had a gun in their car at least once over the past year. Then they asked respondents if they’ve made an obscene gesture or driven aggressively sometime in the last year. But the researchers made no attempt to ascertain whether a gun was in the car at the time of the road rage incident. Nor did they attempt to differentiate law-abiding permit holders from those who possess guns illegally. The survey should have simply asked people whether they have a concealed carry permit.

Dr. Lott explained some of the problems with this paper in a letter to the editor in New Scientist (February 22, 2006):

Also a single cross-sectional survey tells us nothing about causation. Ironically, the researchers’ regression results also show that liberals are much more likely to engage in road rage (both making obscene gestures and driving aggressively) than conservatives, and that the difference is larger than the difference for whether one had carried a gun in the car at least once. This variable is apparently never investigated, but presumably the researchers are also concerned about liberals being allowed to drive cars.

Surveys can be a useful first approximation, but, as noted above, there is in fact much more direct evidence available on the behavior of concealed handgun permit holders.

The other paper by Bushman, Kerwin, Whitlock, and Weisenberger ran experiments where either a tennis racket or a plastic BB gun was placed on the passenger seat of the car.  The researchers found that people drove more recklessly when they were accompanied by the plastic BB gun.

But there is an even more basic potential problem.  If the subjects know why the experiment is being done, they might concur with the anti-gun agenda of the experiment and choose to drive more recklessly when the BB gun is present.  Obviously, real-world data from Michigan shown above doesn’t face the same potential bias, and it shows that permit holders who are much more likely to have guns in their cars are much more law-abiding when it comes to driving.

Our research here has gotten coverage at Fox News.

Finally, it is very disappointing that the authors of one of these studies (David Hemenway, Mary Vriniotis, and Matthew Miller) have continued their practice of being unwilling to provide other researchers with their data, even when the authors have been promised that the data will only be used to evaluate the research that the authors have already published. Once a paper is published and the researchers are discussing their published results in the media, it seems incumbent upon them to make their data public so that a meaningful discussion can take place.