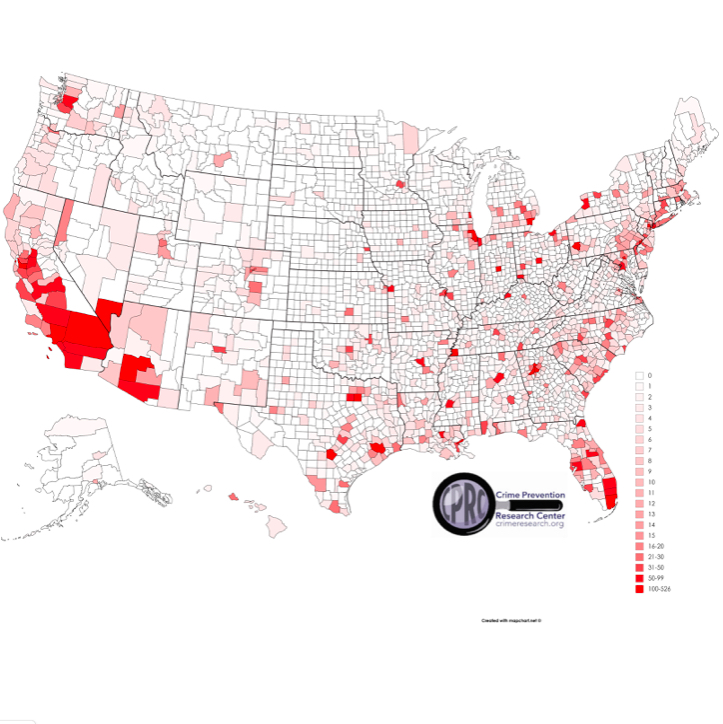 You can examine the picture of the US counties in more detail by opening it in a new tab.

The Distribution of murders

Murders actually used to be even more concentrated.  From 1977 to 2000, on average 73 percent of counties in any given year had zero murders. Possibly, this change is a result of the opioid epidemic’s spread to more rural areas. But that question is beyond the scope of this study.  Lott’s book “More Guns, Less Crime” showed how dramatically counties within states vary dramatically with respect to murder and other violent crime rates. 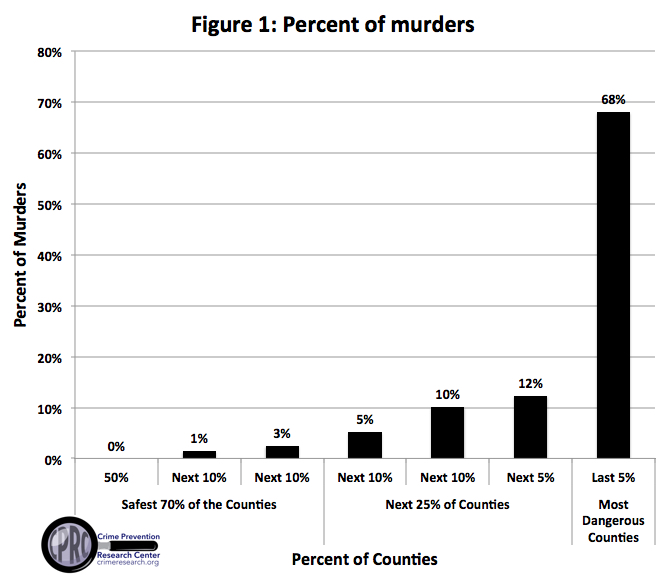 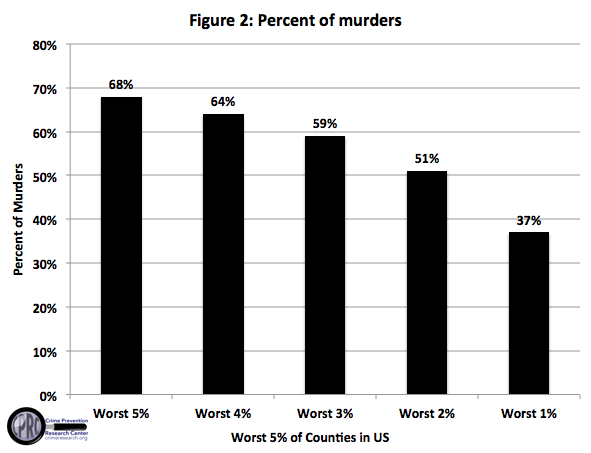 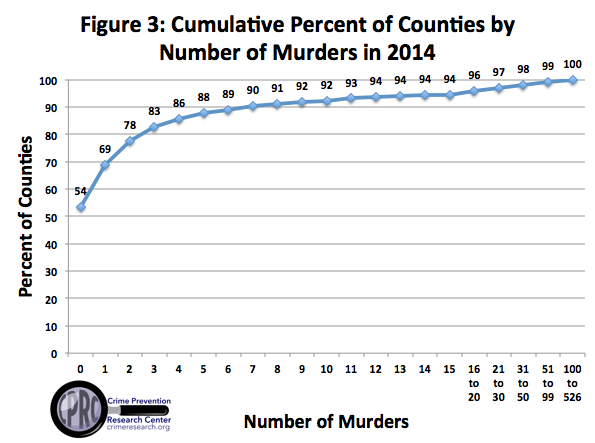 Even within the Counties with the murders, the murders are heavily Concentrated within those counties

When you look at individual counties with a high number of murders, you find large areas with few murders. Take Los Angeles County, with 526 murders in 2014, the most of any county in the US. The county has virtually no murders in the northwestern part of the county. There was only one murder each in Beverly Hills, Hawthorne, and Van Nuys. Clearly, different parts of the county face very different risks of murder. 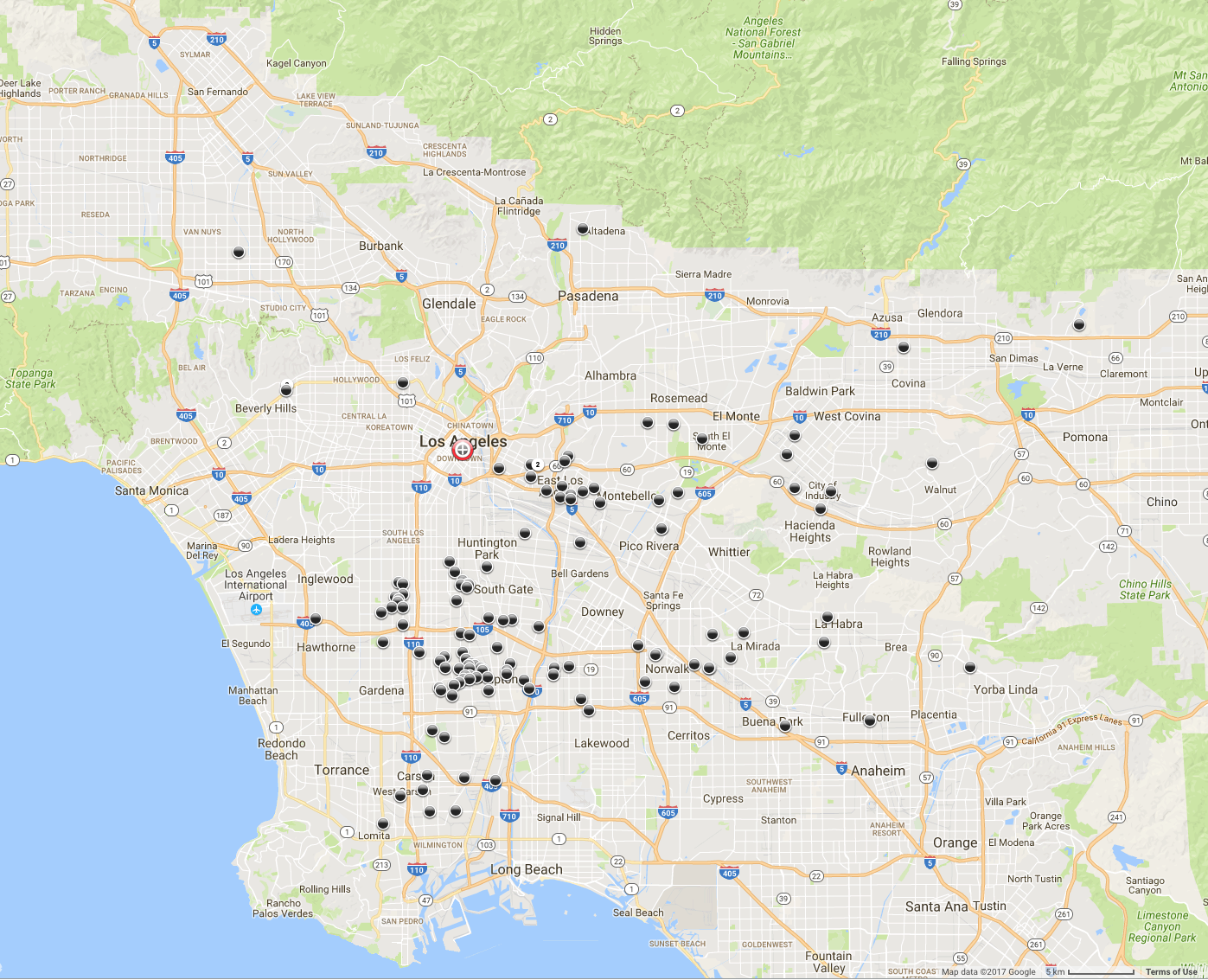 The map below shows the distribution of murders in Indianapolis, with 135 murders. Although the city extends well beyond the 465 Highway that encircles downtown Indianapolis, there are only four murders outside of that loop. The northern half of the city within 465 also has relatively few murders. 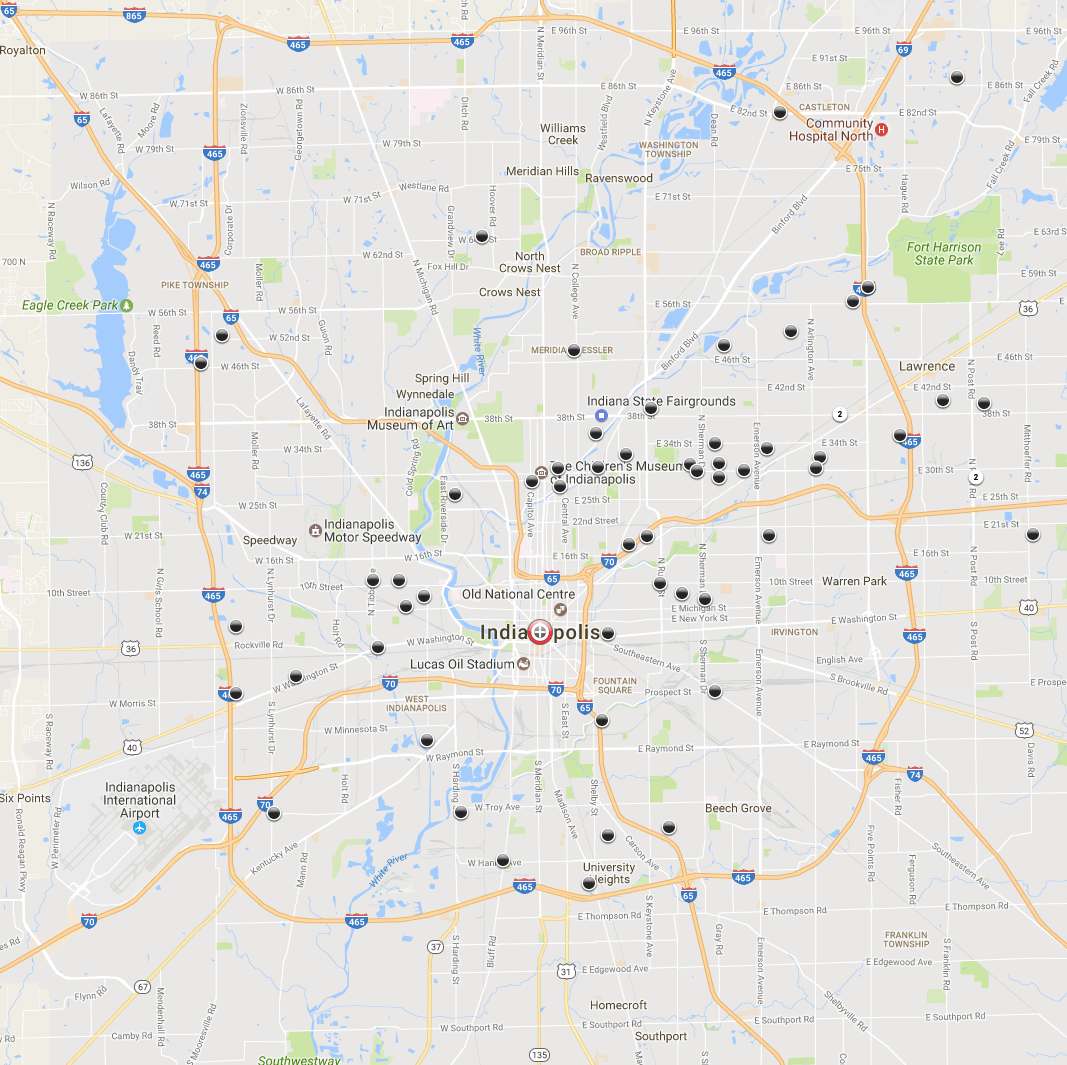 Washington, DC has large areas without murders. 14th Street NW divides the eastern and western parts of the district, with murders overwhelmingly limited to the eastern half. The area around the capitol is also extremely safe. 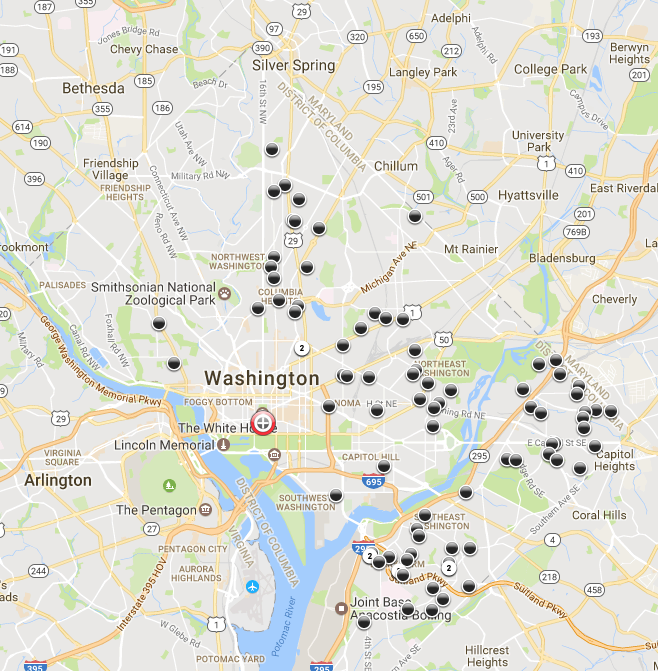 Here is the murder map for Dallas. 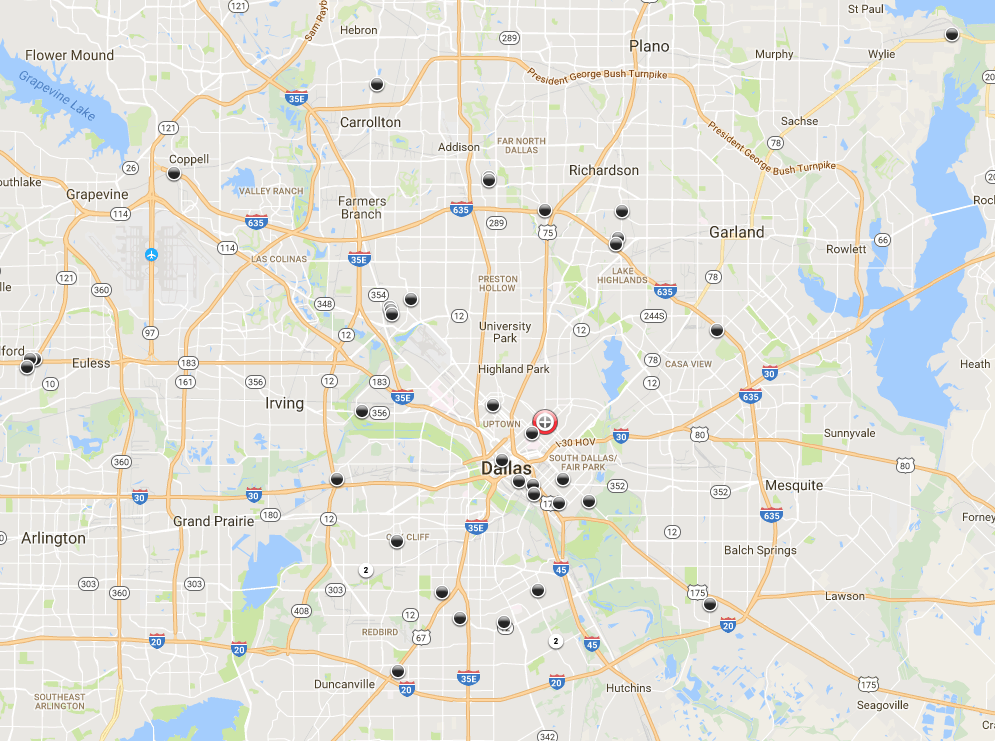 Here are Chicago’s murders through the first 4.5 months of 2017 (there were 222 homicides by that point).  One small neighborhood, Austin, accounts over 25 murders.  But 23 of the 77 neighborhoods in the city have zero murders, and most of the 40 neighborhoods in orange have only one murder.  Twelve of the neighborhoods have 10 or more murders. 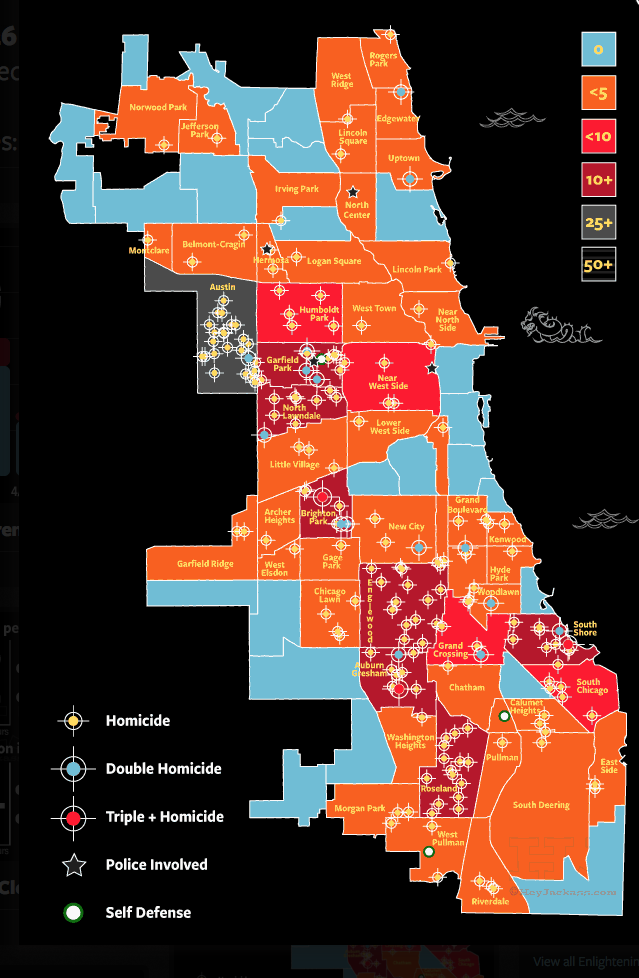 According to a 2013 PEW Research Center survey, the household gun ownership rate in rural areas was 2.11 times greater than in urban areas (“Why Own a Gun? Protection is Now Top Reason,” PEW Research Center, March 12, 2013).   Suburban households are 28.6% more likely to own guns than urban households. Despite lower gun ownership, urban areas experience much higher murder rates. One should not put much weight on this purely “cross-sectional” evidence over one point in time and many factors determine murder rates, but it is still interesting to note that so much of the country has both very high gun ownership rates and zero murders.

This study shows how murders in the United States are heavily concentrated in very small areas. Few appreciate how much of the US has no murders each year.  Murder isn’t a nationwide problem.  It’s a problem in a very small set of urban areas, and any solution must reduce those murders.

The number of murders for each county Excel file_2014 For the column FIPS_CTY, 777 is for Tribal Agencies’ data and 999 is State Police data.  The data is originally from the FBI UCR and is available from the University of Michigan’s ICPSR.  What the county and state codes number correspond to are provided here.

While we have been unable to locate a copy of his research, Robert Muggah (Igarapé Institute) says “that 99% of violence in the USA is concentrated in 5% of street addresses.“