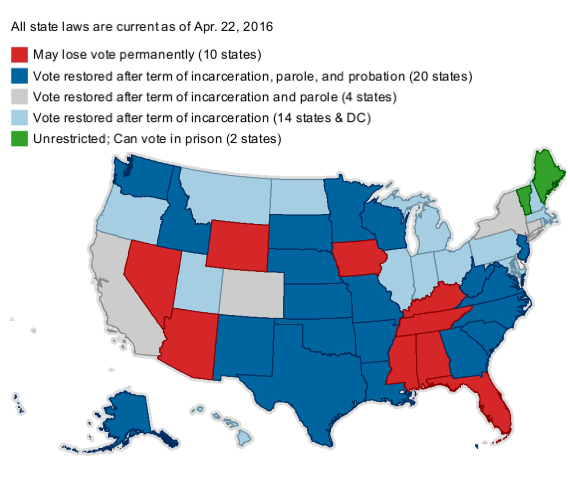 Evidence on Felons voting for Democrats

With the moves last year by Virginia Governor Terry McAuliffe to give voting rights to 200,000 felons in his state and Maryland last year giving the right to vote to 40,000 felons after then are released from prison, the push by to give felons voting rights has been going on almost continually since the 2000 election.

A reminder from some past work by Dr. John Lott.  From a piece that he published at Fox News:

In my own work, I examined a Public Opinion Strategies survey that interviewed 602 adults in Washington State in May 2005.

Of the respondents, 102 were felons who had their voting rights restored, while 500 were non-felons. Even after accounting for other differences that predict how people vote — race, gender, education level, religious habits, employment, age, and county of residence — felons were 36 percent more likely than non-felons, with the same characteristics, to have voted for John Kerry over George W. Bush and 37 percent more likely to be registered Democrats.

African-American and Asian felons in Washington reported that they voted exclusively for Kerry.

While not all felons may be as Democratic as those in Washington State, the survey indicates that the previous estimates understated how frequently felons vote for Democratic Party candidates.

In fact, it looks as if virtually all felons are Democrats. Felons are not just like everyone else. And the fact that felons are even more likely to vote Democratic than previously believed surely guarantees that some Democratic supporters will continue their efforts to get them to the polls. . . .

Academic work by Jeff Manza and Marcus Britton of Northwestern University and Christopher Uggen of the University of Minnesota estimated that Bill Clinton pulled 86 percent of the felon vote in 1992 and a whopping 93 percent in 1996.

Obviously, these are average numbers. More heavily Democratic areas such as Minneapolis-St. Paul would very likely have percentages of felons voting for Democrats that are above these rates. If heavily Democratic Minneapolis-St. Paul were just 3 percentage points above the average, than felon voting in just this one county gave Franken his win. . . .

Another survey of felons published in The ANNALS of the American Academy of Political and Social Science also shows them strongly preferring Democrats.

The surveys looked at how felons were registered to vote in three states: New York, New Mexico and North Carolina.

At the Washington Times: Felons and the Democratic vote