A new article in the Journal of the American Medical Association by Humphreys, Gasparrini, and Wiebe claims that in studying homicide and suicide rates in Florida from 1999 to 2014 they conclude:

The claims have gotten extensive coverage in the media, such as the Wall Street Journal and Fox News. 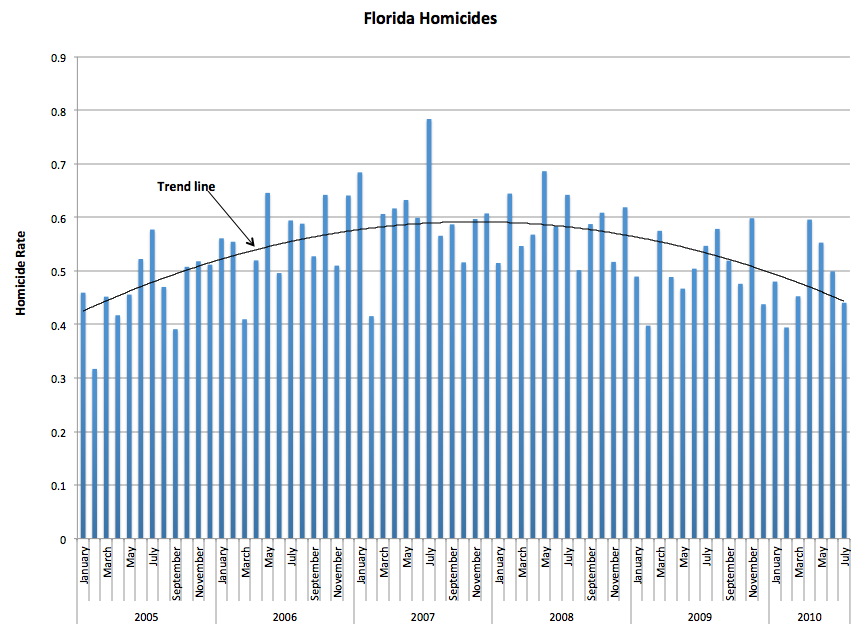 Clearly, there is an increase in homicides in 2006, and it didn’t come back down until 2009.  The point is that there appears to have already been an increase occurring in 2005 before the Stand Your Ground law went into effect on October 1st, 2005.  The drop after 2007 and 2008 also doesn’t fit the simple story of Stand Your Ground laws causing problems.   But other things that affect crime rates also changed in 2006. For example, the arrest rate for murders in Florida fell from 82.4% in 2005 to 66.9% in 2006.  It isn’t too surprising that has the arrest rate falls, the rate that people commit murder would increase.

In any case, in studying the impact of state laws the proper approach is to study all the states and see how the crime rates changes in states that pass the law relative to other states that haven’t changed their laws.  This study picks just one state where the law has passed and compares it then to four states where they say do not have Stand Your Ground (New York, New Jersey, Ohio, and Virginia).  No explanation is provided for why Florida or these particular states are picked.

You can’t just pick one state to study to evaluate the impact of a law. Take a simple example. Suppose you flip a coin 20 times — ten heads and ten tails. If you specifically picked just five heads from the sample, could you conclude that the coin was biased? Presumably not. There is research on these Stand Your Ground laws across all the states. Indeed, Dr. Lott’s research in More Guns, Less Crime examined all the states that had Castle Doctrine and Stand Your Ground laws and found a slight decrease in murders after these laws were enacted, but the effect was not statistically significant.  A law could actually produce a benefit but it is possible because of random factors that the empirical work isn’t controlling for that a couple of the states could still seemingly show a bad effect from the law.  More up-to-date work on Stand Your Ground laws alone was published this year by Dr. Lott in his new book, The War on Guns (Chapter 13).

As an aside, the authors are actually mistaken to have claimed that one of their comparison states, Virginia didn’t have Stand Your Ground rules.  While many states have Stand Your Ground rules because of legislation, some states have these rules because of court decisions and Virginia is indeed such a state.  In 1933, the Virginia state Supreme Court in Dodson v. Commonwealth, 159 Va. 976 ruled: “[A] person assaulted while in the discharge of a lawful act, and reasonably apprehending that his assailant will do him bodily harm, has the right to repel the assault by all the force he deems necessary, and is not compelled to retreat from his assailant, but may, in turn, become the assailant, inflicting bodily wounds until his person is out of danger.”  The impact of Stand Your Ground laws in a state should be directly related to the percentage of the population who can carry guns outside their home so the importance of this court decision in Virginia should be increasing over time (just as it was in Florida, though again note that the increase in Florida’s homicide rate was temporary).

It is particularly strange that this study uses homicides rather than murders, since homicides also include justifiable homicides.  This is important because an increase in homicides because of justifiable homicides could thus be a “good” result — victims who would otherwise have been raped or assaulted would be able to successfully defend themselves.

Yet, there are also not enough cases involving Stand Your Ground cases to explain the purported increase in homicides.  The Tampa Bay Times kept track of Stand Your Ground cases from the end of 2005 through 2013, but the cases came to an average of about 16 per year.  Take 2006. 1,214 homicides that year and the Tampa Bay Times recorded 27 cases where the Stand Your Ground law was raised as a defense.  The homicide rate rose from 5.59 per 100,000 in 2005 to 6.68 per 100,000 in 2006.   But even if none of those cases relying on the Stand Your Ground law had occurred, it would only have lowered the homicide rate in 2006 from 6.68 to 6.53.  That would still represent a substantial increase over 2005.

Lots of other technical problems are in this paper, but this list should give people enough of an idea to start with.