UPDATED: Mass Public Shooting in Florida occurred in ANOTHER gun-free zone: 49 dead in a shooting at an Orlando nightclub

From the UK Daily Mail:

The suspected Islamic extremist who killed about 50 people after taking party-goers hostage inside a gay club in Orlando has been identified.

Law enforcement sources have identified the shooter, who was wielding an assault rifle and a handgun, as US citizen Omar Mateen, from Port St. Lucie in Florida.

The gunman, who was born to Afghan parents, was carrying a suspicious device, possibly a suicide vest, when he opened fire on the dance floor inside Pulse in the early hours of this morning.

At least 50 people were killed and 53 others were injured in the shooting in the deadliest mass shooting in US history. . . .

To make things worse, it took three hours from the time of the attack until the police entered the building.

5 a.m. About three hours after the standoff began, Orlando police chief John Mina says the decision was made to storm the club and “rescue patrons (hiding) in a bathroom” and others still trapped inside the club in an effort to minimize loss of life. The police, Mina said, used a BearCat armored rescue vehicle to “get through a club wall.” . . .

On Friday singer Christina Grimmie’s was murdered in a gun-free zone in Orlando. Early this morning, at least 50 people were fatally shot at an Orlando night club — also a gun-free zone.  In both cases the media has yet to report that these attacks occurred where general citizens couldn’t defend themselves.

Since at least 1950, only slightly over 1 percent of mass public shootings have occurred where general citizens have been able to defend themselves. Police are extremely important in stopping crime, but even if they had been present at the time of the nightclub shooting, they may have had a very difficult time stopping the attack. Attackers will generally shoot first at any uniformed guards or officers who are present (the Charlie Hebdo attack in Paris last year illustrates that point).  Alternatively, they will move on to another place without uniformed officers.

The first person shot at in the Orlando attack was indeed an off-duty officer who was guarding the nightclub was shot at before Omar Mateen entered the nightclub. “He first came into contact with an off-duty police officer working security who exchanged gunfire with Mateen near an entrance.”

In this particular case the police only arrived on the scene after the attack occurred. That illustrates another point: it is simply impossible for the police to protect all possible targets.

It is hard to ignore how these mass public shooters consciously pick targets where they know victims won’t be able to defend themselves (here, here, and here).  And they do so for good reason given the number of mass public shootings that have been stopped by concealed handgun permit holders.

State laws on whether bars (places where more than 50% of revenue obtained from selling alcohol) are gun-free zones.

Florida’s law on where people can carry guns is very clear:

(12)(a) A license issued under this section does not authorize any person to openly carry a handgun or carry a concealed weapon or firearm into: . . .
12. Any portion of an establishment licensed to dispense alcoholic beverages for consumption on the premises, which portion of the establishment is primarily devoted to such purpose; 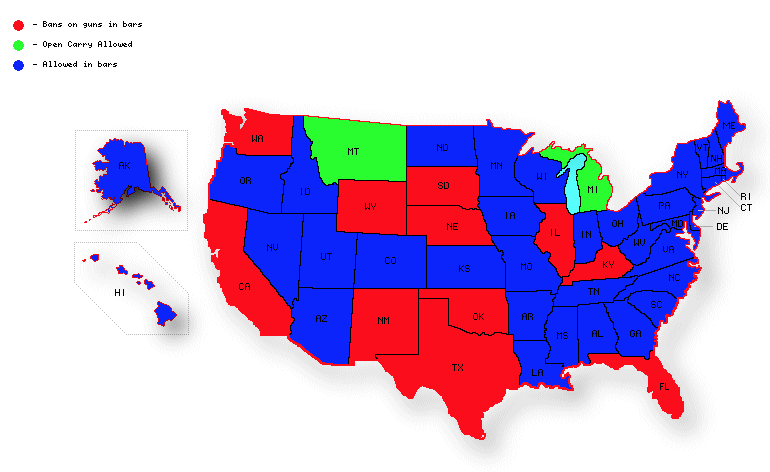 Among the recent states that allow permitted concealed handguns in places that get more than 50 percent of their revenue from alcohol are: Georgia (2014), Iowa (2011), Louisiana (2014), North Dakota (2015), North Carolina (2014), Ohio (2011), South Carolina (2014), and Tennessee (2009).  Besides Florida, other states that prohibit them are: Colorado, Illinois, Kentucky, Nebraska, New Mexico, Oklahoma, South Dakota, Texas (Texas Penal Code § 46.03), Washington and Wyoming.    However, some states such as California issue so few permits that they might as well be banning be banning them in bars.  There is no evidence of problems despite people being able to carry in states that allow people to carry in bars.  Despite the many millions of permit holders in these states, no examples are offered of drunk patrons with permits causing trouble.
Many of the states that allow one to carry a gun in a bar still prohibit you to consume alcohol.  Here are some other state laws: Alaska, Alabama, Arizona, Arkansas (as long as some food is served there), Connecticut, Delaware, Hawaii, Idaho, Indiana, Kansas (not legal where individual drinks are served, but legal in cases where drinks are served by the pitcher), Michigan (allows you to open carry if you have a concealed handgun permit, conversation with Michigan Firearms lawyer Steven Dulan), and Montana (allows you to openly carry a gun into a bar), New York, Oregon, Pennsylvania, South Carolina, Virginia, West Virginia, Wisconsin.
People are allowed to carry in restaurants that don’t get more than 50% of their revenue from alcohol in all the states (again, Montana only allows you to do so as open carry with a permit).  Again, there is no evidence of problems despite people being able to carry in places that serve alcohol across the entire country.
Media discussions today on assault weapons, background checks, but not relevant to the case here.  But the easiest thing for these reporters to check and know for sure, that this was another attack in a gun free zone, is never mentioned once anywhere in the media.  Hillary Clinton and President Obama both used the attack to call for more gun control.  But there is no explanation on how any of Clinton’s proposals would accomplish this:

“We need to keep guns like the ones used last night out of the hands of terrorists or other violent criminals,” Clinton said. “This is the deadliest mass shooting in the history of the United States and it reminds us once more that weapons of war have no place on our streets.” . . .

The Law Center to Prevent Gun Violence has many errors on state laws regarding where one can carry.  This article in the New York Times was wrong about many state laws at the time that it was written.