In Orlando on Thursday, President Obama again called on Congress to do something about these mass public shootings.  But the dirty secret about the four different bills that the Senate will vote on Monday is that everyone knows that none of them would have stopped the Orlando massacre.  Indeed, none of the bills would have stopped any of the mass public shootings since at least 2000.

Everyone wants to do something to stop these attacks, but the one thing that we know does matter — ending gun-free zones – are being completely ignored in the legislation.  Since at least as far back as 1950, all but three U.S. mass public shootings (with three or more fatalities) have occurred in places where citizens are not allowed to carry their own firearms.  Time after time these killers explicitly pick targets where victims can’t defend themselves.

Democrats use recent attacks to justify passing new gun control, but their proposals have nothing to do with these attacks.  Senator Dianne Feinstein’s (D-Calif.) bill would ban people on the No Fly list from buying guns.  But neither Omar Mateen, the Orlando nightclub shooter, nor any of the other Islamic terrorists from Fort Hood to San Bernardino were on the terror watch or No Fly lists.  While Senator Chris Murphy’s (D-Conn.) bill would require background checks on transfer of guns between private parties, this is also completely unrelated to past mass public shootings.

The American background check system prevents people from purchasing guns if they have been convicted of felonies or certain kinds of misdemeanors. Though being on the FBI’s terror watch or No Fly lists sure sounds bad, it doesn’t mean that the person has been convicted of anything.  You can be on the list simply because the FBI wants to interview you about someone you might know.  About 40 percent of people on the watch list are under “reasonable suspicion” even though they have absolutely “no affiliation with known terrorist groups.” 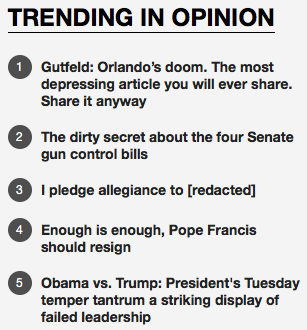