CPRC at Fox News: “Open carry comes to Texas: Why the Lone Star state will be safer in 2016”

With about 900,000 concealed handgun permit holders in Texas, there is a good chance that someone next you in a Lone Star State grocery store or restaurant is carrying a concealed handgun.  Starting Friday, Texas will join 44 other statesthat already allow people to openly carry handguns throughout the state.

Amidst today’s threats of terrorism and mass public shootings, it is a good thing when we enable people to legally carry guns and protect themselves.

Under the new law, a person will need a concealed handgun permit to be able to openly carry a gun.

If the experiences of other states are any guide, few people will actually openlycarry their handguns.  Moreover, businesses can still prohibit guns or request that they be concealed.  However, the Chief Financial Officer of Kroger (America’s largest supermarket chain), has just said that the company will allow open carry. He says that the company hasn’t encountered any problems with open carry.  Other supermarket companies such as Whole Foods, Randall’s, and H-E-B, will be posting signs banning open carry. They will still be allowing concealed carry.

These bans may be short lived.  When Texas originally passed concealed carry in 1996, many stores initially posted signs banning concealed carry. With a few years, those signs all but disappeared.

An odd nuance in Texas law has led to much national attention in the last couple of years.  Before Friday, people were allowed to openly carry rifles, just not handguns.   No problems ever occurred, but simply the additional handling required for carrying rifle as opposed to keeping a holstered handgun, certainly created concern that something might go wrong.

Hillary Clinton also chimed in: “The idea that you could have an open carry permit with an AK-47 over your shoulder walking down the isles of a Supermarket is just despicable.”

Starbucks, Jack in the Box, Chipotle, Wendy’s, Applebee’s, Chili’s and Sonic’s all “respectfully request” that customers not openly carry guns.  More importantly, however, they still allow people to carry a concealed gun. . . . .

UPDATE: 50 days after open carry became law in Texas, The Austin Statesman carried an article with this title: “Open carry controversy started with a bang but shooting blanks so far.”

Fifty days into the open carry era in Texas, things in the Austin metro area have been conspicuously calm.

The policy’s critics thought the law allowing gun license holders to openly carry handguns would usher in a modern-day Wild West, but the American-Statesman found only two 911 calls have been made to Austin area police since the law took effect Jan. 1. Neither case resulted in criminal charges or any violence.

The placid denouement after all the fervor surrounding the law’s adoption had its supporters reminiscing about the period two decades ago when similar outcry accompanied the passage of concealed gun carry laws in Texas.

“It’s kind of funny, and it was hard for me to not chuckle when I heard the same stupid arguments I heard years and years ago,” said Suzanna Hupp, a former Texas House member who was at the forefront of the movement to pass concealed carry laws in 1995. . . . . 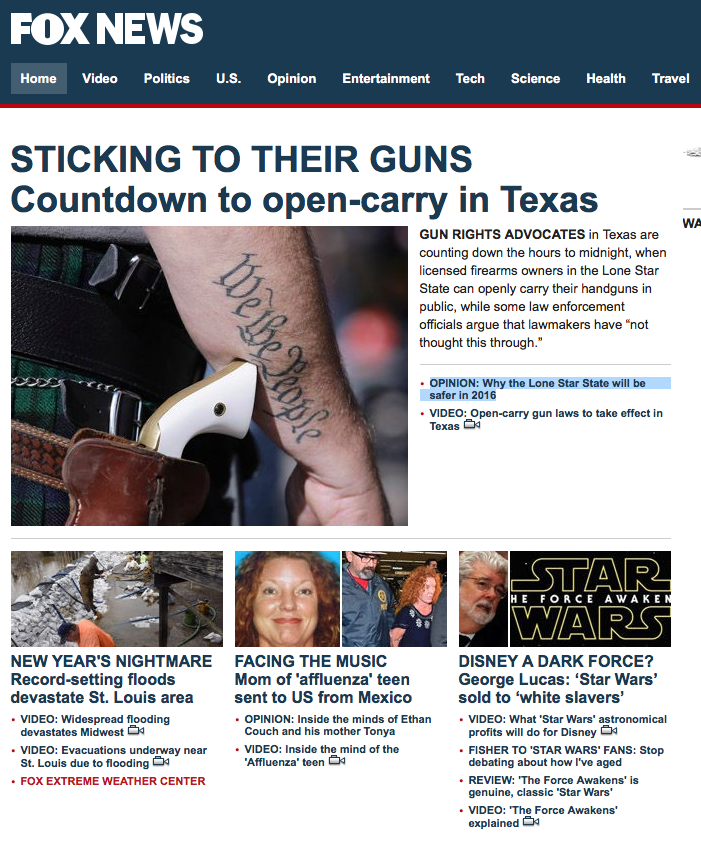 Even before our piece was listed on Fox News’ front page, it was the most read piece in the opinion section. 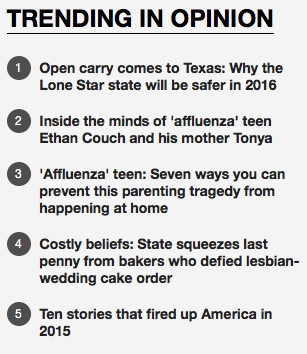 Here is an interesting video on discussing the practical differences in carrying open versus concealed.