John Lott’s newest piece in the Tribune-Review starts this way:

Anytime, anyplace, terrorists can strike. With just his signature, President Obama could eliminate the gun-free zone policies that leave our military personnel defenseless. Late last week, Republicans in the Pennsylvania Legislature called on Gov. Tom Wolf to exercise the same authority for the state National Guard.

CPRC at Fox News: “Gun-free zones are killing us”

Hours before the latest shooting at a movie theater in Louisiana, President Obama lamented what he regards as his greatest failure as president – his inability to pass gun control measures.

In an interview with the BBC, he complained that we are “the one advanced nation on Earth in which we do not have sufficient common sense gun safety laws.”

President Obama wants to take away people’s guns. Last week, he lamented to the BBC that his biggest frustration as president was not getting major gun control passed during his presidency.

How much does he dislike Americans having guns?

Permit holder saves family of 4 that man was shooting at

Fox 19 in Cincinnati, Ohio originally reported this story from Winton Hills, Ohio.  Fox News has this:

[Thomas] McCary [62-years-old] was arguing with a woman around 8 p.m. Sunday night and, when the woman’s brother, Patrick Ewing, approached, McCary pulled out a .38-caliber handgun and fired three shots at him, Cincinnati police said.

Christopher Ingraham at the Washington Post has another article on guns.   Unfortunately, Ingraham explicitly ignores the FBI’s definition on mass shootings.  The cases he ends up with involve very few murders and are heavily biased to include gang and other criminal activity.  Curbing gang violence is important, and it could be done pretty simply: stop enforcing the laws or legalize drugs.  …

CPRC on the Laura Ingraham Show: The Danger of Gun-free Zones

CPRC has two of the top four for most downloaded studies dealing with “PSN: Security & Safety” on the Social Science Research Network 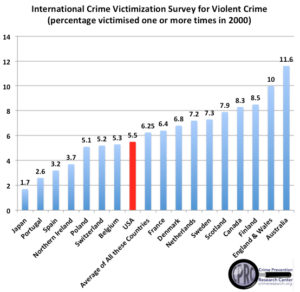 One of the big problems with comparing crime rates across countries is that there are big differences in what constitutes a crime and even whether people report crimes to police. If people don’t think that the police in a country will be able to solve the crime, it reduces their incentive to report the crime to police.…

Lafayette, Louisiana Movie Theater Shooting was yet another gun-free zone, other movie theaters in area didn’t have that policy

The movie theater shooting in Lafayette, Louisiana occurred in yet another place that banned permitted concealed handguns.  The shooting occurred at the Grand Theater.  It’s “conduct policy” openly bans the carrying of guns, just like where the Aurora, Colorado movie theater shooting occurred.  While The Grand Theatre company owns three theaters in the area, none of the other local movie theaters that are owned by other companies have a similar policy (Lafitte Cinema 4, Crowley Cinema IV, The Queen Cinema (confirmed with telephone calls)).…