Are schools and colleges dangerous places, with lots of gun violence?

They claimed that 44 shootings occurred in schools and colleges nationwide since the Newtown, Conn. massacre on Dec. 14, 2012 and Feb. 10 of this year. Out of the 44 shootings, a total of 28 died. To dramatize their numbers, Bloomberg’s groups emphasized that one of these attacks occurred every 10 days.

But their statistics are not what they seem. Included in the numbers are suicides. Also included are late night shootings taking place in school parking lots, on their grounds or even off school property, often involving gangs. As “shootings,” they also include any incident where shots were fired, even when nobody was injured.

Look at some of the cases included in their misleading statistics:

• A student at Eastern Florida State College retrieved his gun from his car when two men attacked him. One of the men was striking the student with a pool cue, and the student fired his gun wounding him. The gun was legally stored in the student’s car and the police found that he had acted in self-defense.
• A 19-year-old was killed at 9pm in a field near the Hillside Elementary School in San Leandro, California.
• A professor at the South Dakota School of Mines & Technology committed suicide in an empty classroom.
• A 23-year-old man committed suicide late at night on school grounds when no one was around the Algona High/Middle School in Iowa.
• A 38-year-old man was shot to death at 2am on the grounds of the Clarksville, Tennessee High School.
• A 19-year-old man committed suicide in the parking lot of a Portland, Maine high school. No one at the school was threatened. . . .

A discussion on the information in this piece is available Guns.com.

These errors are part of a pattern of errors in Bloomberg funded research. For example, see their discussion on shootings in gun-free zones.

The piece has continued to be the most read opinion piece at Fox News. 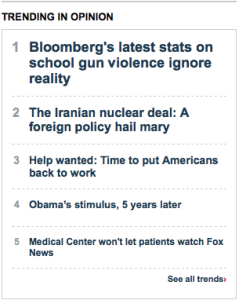